Why Walmart is Doubling Down on Augmented Reality

Augmented reality tech is nothing new — in fact, it’s been around since 1968 (surprising, right?). And yet, it’s only in recent years that AR has begun to reach its full potential. Advancements in the tech itself and the growing ubiquity of smartphones have converged to create a whole host of new applications for AR outside the realm of gaming — and one of the biggest arenas is commerce.

It’s about time. Among the many advantages of ecommerce — access, convenience, competitive transparency — experience doesn’t generally top the list. It is still much more pleasurable (and often more effective) to stroll through a store than it is to scroll through a website. AR is changing that, and as a result retailers and other commerce-focused platforms are rolling out new AR tools left and right — Amazon, IKEA, Google, Snap, Savage X FENTY, Pinterest and Chewy, to name just a few.

Walmart is also on that list, but it stands out because Walmart has the ability to introduce the power of AR to more consumers than almost any other retailer given its massive global reach. Every week approximately 220 million customers visit Walmart-owned banners across 24 countries and websites.

For that reason, when Walmart rolls out new tech, it’s noteworthy. When Walmart makes three different announcements about the same tech in the course of one week, it’s a sign of something bigger happening in the retail landscape. That’s exactly what happened at the end of June — Walmart announced the rollout of an AR shopping tool for furniture, the acquisition of AR optical tech company Memomi and shared plans for a new in-store AR shelf scanning tool.

As Brock McKeel, SVP of Site Experience for Walmart Ecommerce tells it, the company’s recent flurry of AR rollouts is all about solving customer pain points. “The largest and closest store to our customer is actually in their pocket,” McKeel said in an interview with Retail TouchPoints. “Now, that’s great for us, but it also means competition is one step away. And competition is no longer just retail — the consumer is constantly experiencing new innovation in the ways in which they’re shopping and doing business and interacting on their phones. It’s now an always-on experience of making decisions, whether that be in the aisle or on the couch. Looking at the customer pain points and shopping behavior over time helps us make sure the solutions we deploy provide a fast and personalized way for them to engage with us.”

How AR is Changing the Commerce Experience

By 2025, it’s estimated that nearly 75% of the global population and almost all smartphone users will be frequent AR users, according to a recent study by Snap and Deloitte Digital. What’s more, while most users today still see AR as a “toy,” the study found that 76% of consumers want AR tools they can use in their everyday lives. Enter retail.

AR try-on has almost become commonplace in categories like furniture, accessories and beauty. Apparel is a bit tougher — it’s a lot harder to virtually fit a body than it is a face or a room — but that tech is coming along quickly. There will be a time in the not-too-distant future when digital shoppers will be able to “try out” almost any product from the comfort of their couch.

AR has been proven to increase consumer confidence in online purchases, make the online experience more engaging and personalized and (as Walmart’s latest applications demonstrate) help to merge the online and offline retail experience toward retail’s ever-present aim of achieving “omnichannel-ality.” All this at a time when experience is more important to shoppers than perhaps ever before — 80% of consumers and business buyers said the shopping experience is as important as the products themselves in a recent Salesforce report.

So it should come as no surprise that enabling these kinds of experiences can have big payoffs for retailers — interacting with products that have AR experiences leads to a 94% higher conversion rates, according to the Snap/Deloitte study.

Shopping Experiences from Your Couch

Walmart has been making big moves in the realm of digital experience (or DX) for several years now, including and beyond AR. In just the last year alone the company has:

AR has long been part of the company’s DX mix with its acquisition of the virtual fitting room platform Zeekit in 2021 — which now powers AR try-on for apparel on Walmart.com — and by becoming one of the first retailers to offer home décor try-on via Pinterest, among many other initiatives.

Now Walmart has agreed to buy the AR optical tech company Memomi, which since 2019 has enabled digital measurements for Walmart and Sam’s Club optical customers, as well as the optical ecommerce experiences on SamsClub.com.

The week prior to that announcement the company unveiled a new AR feature in its iOS app that allows customers to virtually try out around 300 furniture and home décor items in their spaces, either while they’re in stores or at home. The retailer plans to expand its assortment of AR-enabled products in the coming months with a focus initially on popular back-to-college items. “This allows us to help you bring that showroom into your own home, but you can do it in stores as well,” explained McKeel.

To access the feature, customers click the “View in your space” banner on AR-enabled items in the app. Users can toggle the item dimensions to check if the product will fit in their spaces and snap a picture for later. Haptic feedback (vibrations in response to actions like trying to maneuver virtual furniture outside of boundaries of the room) adds realism to the experience, mimicking the bang of that couch hitting the wall. The tool also offers a number of accessibility features for customers with disabilities, including gesture control integration and voice-based instructions and descriptions.

There is sure to be more where that came from, evidenced by the fact that Walmart is adding 5,000 new hires to its already 20,000-strong Global Tech team. One upcoming project the group is working on is AR-powered product sorting that would let customers filter the products on store shelves similar to a results filter on a website.

The concept is based on AR tech already being used by Walmart associates for inventory management and would allow customers to point their mobile devices at shelves via the Walmart app to easily find the right products. For example, a customer could filter all the available items on a shelf to see which ones are gluten-free.

More than 50 years after its inception, the possibilities for AR now feel limitless. And with an entire universe (or should we say metaverse) of new digital spaces cropping up, building out AR-based experiences certainly won’t be a wasted effort. McKeel didn’t have any specific updates to share on the metaverse front, although he did say Walmart was “definitely looking at it,” adding that “how we play in [the metaverse] will continue to evolve as our customers evolve.

“We’re constantly evolving, listening to customers and listening to our associates,” McKeel added. “Our associates are a great representation of the communities around them, so their feedback is really important as we think about what comes next.” 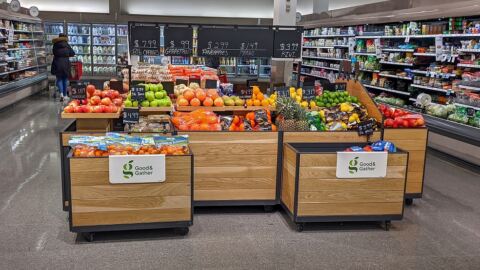 RICE 2022: Why Target Brought a Touch of ‘Tar-zhay’ to Grocery Sales