Over the last few years a new term has entered the retail lexicon — RaaS, or resale-as-a-service. While a host of companies now stake claim to the phrase, ThredUP literally owns it (and has the trademark to prove it).

The company coined the term back in 2019 when it formally launched a white label version of the tech and logistics that power its own apparel resale marketplace. Now ThredUP has developed resale offerings for close to 30 major retailers, including Gap, Walmart, Adidas, Vera Bradley, Rent the Runway, eBay, Crocs and even LG (its first non-fashion partnership). PacSun and Target were added just this month, and on the company’s latest earnings call founder/CEO James Reinhart hinted that upwards of 10 more “prominent brands” might join that list by year’s end.

But rivalry in the RaaS space is intensifying, with at least five competitive startups launching in the last three years alone and recommerce software firms attracting $127 million in equity funding last year. That’s more than the previous three years of funding combined, according to CB Insights.

No longer in startup territory itself (the company IPO’d in 2021), ThredUP has a first-mover advantage and a multi-pronged growth plan that includes:

Despite operating one of the largest and most established online resale marketplaces in the U.S., ThredUP no longer considers itself a retailer but rather a technology company — technology is the company’s largest expense, with $128 million spent on operations, product and tech in 2021.

But even still, ThredUP’s biggest advantage in the RaaS race is its own consumer-facing marketplace. Not only did the building of this marketplace give ThredUP the insights and infrastructure needed to power RaaS, but it established the company’s brand ­— trusted first by secondhand shoppers and now by more and more retailers that want to serve those consumers as well.

The timing is perfect for ThredUP, which has scaled its RaaS solution just as traditional retailers are catching up to consumer sentiment about resale. According to ThredUP’s 2021 Resale Report, one in three retailers said resale is becoming table stakes, and 42% of retail execs surveyed said resale will be an important part of their business within five years.

Perhaps more importantly, 34% of consumers said they are more likely to shop with a brand that offers secondhand clothing alongside new. With the overall secondhand market projected to double in size over the next five years to $77 billion, resale is getting harder for retailers to ignore.

“I think retailers were looking at resale over the past 10 years trying to figure out whether it was a fad or had real staying power,” said Reinhart in an interview with Retail TouchPoints. “But this is a real trend being driven by young people, and it’s only going to become more apparent over time. Brands are really starting to get that. I also think having The RealReal, Poshmark and ThredUP all become public companies within an 18-month window solidified that these are powerful players in the industry, and they need to start paying attention to what’s happening and where the consumer is headed.”

Despite its growing popularity, resale remains hard to do — at least profitably. It requires streamlined reverse logistics and the ability to process single-SKU items at scale, not something most retailers are equipped for.

It might seem counterintuitive for ThredUP to offer this valuable technology to other companies, potentially creating new competition for its core marketplace business. But several companies in the industry, searching for additional revenue streams, have taken this path. Amazon and Instacart, for example, both offer white-label tech that they developed in-house.

For a purpose-based company like ThredUP, the endgame is even clearer: “Our general view is, the more resale the better,” said Reinhart. “Part of being a mission-driven company is we want to make the biggest impact in the world. I believe that if we grow the pie, ThredUP will do quite well getting its share of that pie.”

This altruism is mixed with a hard-headed business plan. “We’re helping the brand power [resale] on the front end, but they’re still 100% reliant on ThreadUP on the backend,” said Reinhart. “Everything runs through our technology, our infrastructure. We hold the product, and we do all the fulfillment. We’re not giving [our tech] away, we sit at the intersection of the most important pieces of the supply chain.”

Beyond that, the RaaS offering has a very real, positive effect on ThredUP’s bottom line, as Reinhart explained during the company’s 2021 earnings call: “ThredUP benefits from RaaS not only because it amplifies our ongoing supply advantage, but also because it increases our sell-through and our return on assets. In addition, our premium and enterprise platform solutions are designed to support the expansion of our long-term profitability metrics by creating a recurring high margin revenue stream.”

Getting RaaS Right Means Focusing on Ease of Use

ThredUP has solved three of the hardest problems involved in making online resale economical — reverse logistics, single-SKU processing at scale and a managed marketplace that removes friction. In fact, the core proposition of both ThredUP’s consumer marketplace and its RaaS offering is ease of use. Unlike other resale platforms, customers don’t have to photograph and list the items themselves, they simply mail it all to ThredUP in a pre-labeled bag.

“When I came up with the idea for the company, I was really obsessed with market failure,” said Reinhart. “Shopping on eBay or Poshmark and not [being able to do things like] return is just a really hard way to transact on the internet. And then when you look at the data on how much of the stuff we all give away ends up in a landfill — why is that? It’s because there had not been any innovation to figure out a way to recirculate that clothing. If you actually want consumers to do anything about it, you have to make it easy for them. We’re relentless around removing friction.”

ThredUP is determined to make RaaS equally easy for retailers, touting that brands can launch their resale initiative for free as quickly as 30 days with the core offering. More nuanced programs are available through premium- and enterprise-level RaaS tiers.

The ThreadUP RaaS service allows brands to offer their customers credit toward future purchases when they send in items they want to sell, and many retailers also offer an additional payout on top of what the product is worth if customers choose to receive brand credit rather than a ThredUP payout. Brands also have the opportunity to source resellable inventory from ThredUP’s vast assortment to create their own white-label branded resale shop.

For example, Athleta customers can receive a pre-labeled “Clean Out Kit” when they shop online or in stores, or they can use their own packaging and print a free shipping label from the ThredUP website. Once the items they send in have been processed by ThredUP, they’ll receive the normal payout for that item plus an additional 15% if they choose to receive their payout as Athleta credit. ThredUP handles all the logistics on the backend, and the retailer benefits from that infrastructure in the form of return business and customer esteem.

ThredUP also has expanded its RaaS offerings for brands that want to run a resale shop on their own website or even in stores. Madewell’s recent secondhand pop-up shop in Brooklyn, N.Y. demonstrates how retailers can bring their resale initiatives to consumers IRL with the help of ThredUP.

“We empower a brand to leverage resale and secondhand product to tell a story, but we don’t have a strong point of view around how a brand tells its story,” said Reinhart. “The platform that we’ve built is ready for any brand to build a high-quality resale program and scale it. That’s really the exciting part, because to really bring resale to the masses, we need to scale. You can’t build a great white-label resale shop unless you have great supply.”

ThredUP also needs that continual supply of product to make the economics of its own business work, and the company has been investing heavily to ensure it can handle the influx as its consumer business and retailer partnerships grow. The company’s new flagship distribution center in Dallas is scheduled to come online later in 2022 with a 16.5 million-item capacity, and two additional processing centers were recently opened in Texas and Tennessee focused exclusively on processing Clean Out Kits.

That infrastructure is what differentiates ThredUP from its RaaS competitors, according to Reinhart, along with the insights generated by its managed marketplace. “There’s a real difference between startups with a couple of million dollars and a company like ThredUP that has processed 100 million pieces of clothing and is public,” he said. “We also have an enormous data advantage — we have more than 10 years of data that helps us figure out how to merchandise the product, how to price it, how to discount it over time and where the real residual value is.”

ThredUP is further scaling up with expansion into Europe through the acquisition of Remix in 2021, as well as moving into Latin America with its new stake in resale marketplace Vopero.

While it may indeed be a force to be reckoned with in resale, ThredUP has not yet cracked the nut of profitability, and investors are getting antsy. Despite a 35% YoY increase in revenue in 2021, the company reported a net loss of $63.2 million for the year, and ThredUP stock is down 56% YoY as of April 11, 2022. According to Reinhart and CFO Sean Sobers, the lack of profits is due in large part to the company’s aggressive investment in the aforementioned infrastructure and international expansion, all of which they claim widens its “competitive moat.”

“Our business model necessitates this approach,” said Sobers on the company’s Q4 earnings call. “In order to grow sales, we must first have the processing and storage capacity in place to support future listings growth and accelerated turnarounds.”

“Ultimately it’s just about getting bigger to serve more customers — as we do that, the profits will come,” Reinhart told Retail TouchPoints. “If you think about any company that’s been an innovator in the economy, whether it was Amazon or Tesla or Netflix, people always pooh-pooh the growth strategies and say ‘These companies are never going to make money.’ We know that’s not true, because once you cross that threshold of paying back your fixed costs, you can generate enormous amounts of profit. We take the same approach.”

Don’t miss the chance to hear from ThredUP President Anthony Marino and dozens of other top minds in retail at the Retail Innovation Conference & Expo May 10-12 in Chicago. Register here today! 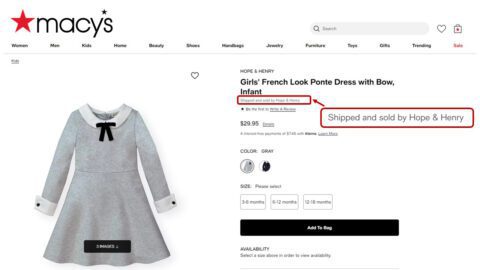