Retailers — particularly small businesses with limited marketing budgets — are always on the lookout for new ways to generate buzz and bring in new customers through unique promotions. Mad Science, a science enrichment/education company for kids, has found the formula to personalize and localize its messaging to potential customers via the new Shop and Ride app for New Jersey transit riders.

Mad Science generally visits schools, scout troops, parks and recreation centers and libraries, but it also has 18 of its own brick-and-mortar locations — one of which is in Hoboken, N.J., the first area where the app, developed by Xerox, is testing. The app allows area businesses to boost awareness of their brick-and-mortar locations, using beacon technology placed on bus shelters and in participating businesses’ locations, to deliver personalized, hyperlocal mobile offers. The offers are targeted based on a transit rider’s preferences and travel patterns.

For Mad Science, the app’s beacon technology will help bring more visibility to its hidden location, which is inside a converted factory building with multiple suites.

“This beacon is a lifesaver for us to let people know that we’re there,” said Julie Serritella, Chief Mad Scientist at Mad Science of Union to Hudson in an interview with Retail TouchPoints. “If they’re interested in family activities, this is a way for us to pull in new clients that have never heard of Mad Science before.”

The company is just starting to develop customized offers for app users, including discounts on classes that need to be filled.

“We appreciate the fact that we can specialize [our offers] for a limited number of things, such as what days of the week we want to have people get the offers,” said Serritella. “We can customize and change them quickly if we’re sold out of something. It’s a win all the way around for us.”

Another huge benefit for Mad Science is the personalization aspect of the app. Serritella said the coupons the company plans to offer on Shop and Ride are similar to what it would have offered via online coupon services, but now they can be personalized and targeted to locals.

“This is so much more dynamic,” she said. “Instead of going out to 100,000 people and hoping that one of them bites, this is for people who are in our neighborhood anyway and are going to find us, so it’s ultra-focused and localized.”

What people may not know about Xerox is that the company offers more than just printers and copy machines. Xerox also develops and supplies ticket payment systems, and New Jersey’s public transportation system, NJ Transit, is one of its customers. The companies chose the New York City suburb of Hoboken, N.J., with its more than 200,000 transit riders, as the first area for testing the app.

“Our research shows that riders want offers for food, shopping and entertainment based on their likes as they travel,” said Chris Holmes, VP of Mobile Commerce Solutions, Payments and Public Sector at Xerox in a statement. “Shop and Ride was developed with this in mind so deals are timely, relevant and readily available.”

Xerox worked with AR James, a local advertising agency, to recruit merchants for the initial launch of the app. Xerox wanted to start with a small number of businesses, said Holmes.

“We’ve worked with AR James, because they have the right to advertise on the bus shelters up and down the Hoboken city,” said Holmes in an interview with Retail TouchPoints. “We’ve placed beacons all over Hoboken, attaching them to bus shelters. The application is alerted when the user is in the vicinity of these beacons. Each participating merchant also has its own beacon, which emits a unique code, so they know exactly where the potential customers are. We can either promote an individual merchant’s offers or a group of merchants that are local to where the particular user might be.”

Xerox is currently testing the initial stages of the app in order to enhance its abilities. Hoboken is just the first stop, with more locations scheduled to be added along the way. The Shop and Ride app is now available to download on the Apple Store. 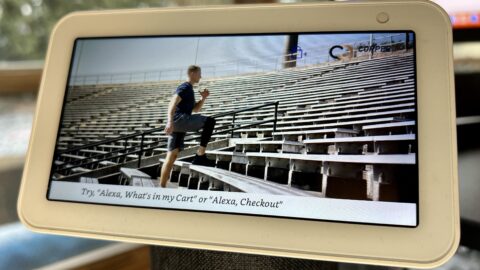