When urban fashion and footwear retailers DLTR and Villa merged in August 2017 to become DTLR VILLA, the companies sought to build a national following through their target audience: Millennials. With a fleet of 250 stores in 19 states, the retailer turned to SMS messaging to drive more traffic and revenue to its e-Commerce site. From 2018 to 2019, the retailer’s SMS subscription list grew by 950%, while revenue through the SMS program (when compared to email messaging) grew 1,300%.

Janelle Lutz, Director of E-Commerce at DTLR VILLA, noted that upon committing to Tap-to-Join in May 2019, the retailer established a promotion of $10 off any $50 purchase. This was the first catalyst to that got subscribers to “jump through the roof” for an estimated 250 new subscribers per week. DTLR VILLA launches a maximum of two promotions per week before the holiday season, but the retailer ramped it up to three during the season, with the texts always based on a new product launch or a promotion.

“If we’re running a raffle, we run it through text,” Lutz said in an interview with Retail TouchPoints. “We know our customer well, and we know that they’re driven on launch product and promotions. We don’t want to mess around with anything in between. We look at it as: ‘We have a promotion and we have two great shoes releasing on two different days.’ [Given that situation], it’s worth it to send three texts out. We try not to force anything — we want the product to speak for itself to the shopper.”

Lessons Learned: Texts Must Be Consistent And Promote High-Demand Products

The retailer typically launches new products every week, but not all launches are the same. For example, when a new pair of Adidas Yeezy shoes launched on the site last year, that product was in limited supply but garnered huge demand. In response, the DTLR VILLA team started a raffle, and instead of sending a text about the release, they sent a text hyping the raffle, with a link to sign up for a chance to win a pair.

“Your pair of jeans or white Air Force Ones aren’t going to get people clamoring to your site,” Lutz said. “They aren’t enough to drive someone to the site without being annoyed about getting a text about something they already know. It’s more about giving them information that they feel privy to.”

With Tap-to-Join, DTLR VILLA designed the sign-up access point to be simple for customers. Mobile visitors are immediately presented with a subscription pop-up asking them to sign up for text updates. Upon tapping the center call-to-action button, the brand’s SMS keyword “DTLR” and the recipient number automatically populate the shopper’s messaging app. Once the shopper hits send, the retailer automatically replies with a request for an email address in exchange for the promotion information.

Lutz said that the company made it a goal in early 2019 to be consistent with its SMS messaging by sending at least one text message once every week.

“Usually we did it on a Saturday around very coveted product,” Lutz said. “We would send a text out that notified the consumer, ‘Hey, this shoe is dropping, come get it.’ Slowly we started to see some revenue come through the channel. We offered a pretty decent reward to the customer to get that phone number, because email is one thing, but to give your phone number, people get a little cautious.”

Now that DTLR VILLA has established consistency and a much larger subscriber list, the retailer is setting its sights on customer segmentation. Instead of sending out the same promoted texts to every subscriber, the company is seeking to test different texts with various subsets of shoppers, to further determine what promotions and products are a better fit for certain campaigns.

“If it’s a promotional shopper, let’s continue to send them the sales that are going on,” Lutz said. “If it’s the sneakerhead, okay, continue to send them the launched product. We’re also going to be doing a loyalty text. If a customer purchased something, after 10 days they’ll get a text from us saying, ‘Thank you for your purchase, here’s 10% off to use on your next purchase.’” 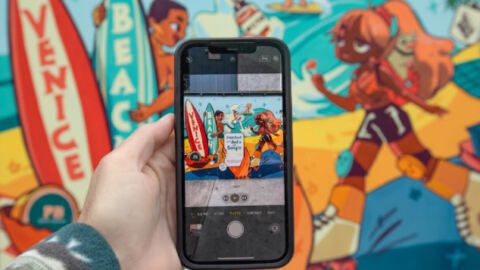