Thinking Retail: Ruminations From A Walk In Williamsburg

We at HighStreet had the pleasure of hosting a group of Aptos clients on a walking tour of the hip urban hamlet of Williamsburg in Brooklyn last month. Part of Aptos’ Thinking Retail series, we had no idea what to expect. Seasoned veterans of the New York City store tour, why, we wondered, were we across the bridge in Brooklyn? What about the hot new flagships we were dying to see? This year’s whiz bang pop-up stores? What could possibly be that interesting…in Brooklyn? Well…we sure found out. And you should too.

Williamsburg is well known to the city locals as a mecca of businesses that break convention — in more ways than one. They are local, fresh, forward-thinking and unapologetically unique. Yes, you can find some of the big brands flanking the storefronts. But rest assured, they had to get hip quick to fit into the village vibe of the place — and, until recently, few had done so successfully.

As store innovation consultants, we spend a lot of time watching the world around us and pondering out loud regarding what we’re seeing. Looking through a wider retail lens, this year’s big “a-ha” is that some of the most refreshing stories have emerged from owners/founders that know very little about retail.

They are people creating store concepts from the heart, and this purpose-driven intent almost makes it look like a place where ‘buying stuff’ almost seems secondary. Sure, they’re making money, but they do so with strategies unified not just by a brand, but by a higher purpose. The shops in Williamsburg are one of the richest neighborhoods (in more ways than one) we’ve seen representing this idea. Here are some examples: 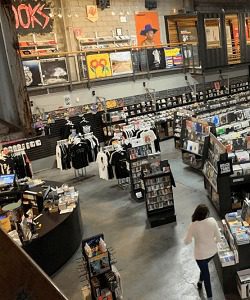 This record store is not a store — it’s the place that the London Punk aficionados come to hang out, rock out and shout out — but not sell out. The U.S. sister of its UK mothership, it’s like walking into a massive, gritty garage. Records are everywhere of course, but so are T-shirts, books, artifacts and instruments. There’s even a coffee bar.

But don’t expect to be greeted warmly. By design, customers are given time and space to explore. There’s a stage and ping-pong tables, complete with sticky floors — and expect a mosh pit when it gets going at night. There are pop-up shops throughout the space tightly attuned to deep culture cues, and it was clear that only certain brands earn the green light to be there. Rough Traders are edgy, rebellious and know their brethren. Authentic to the bone, they don’t care what the mainstream thinks — and they’ll make sure you know it. This is not a store; it’s a “third place” — to buy, play and punk out. There is an omnipresent vibe of “Get out if you don’t like it” — and we were in awe of it. 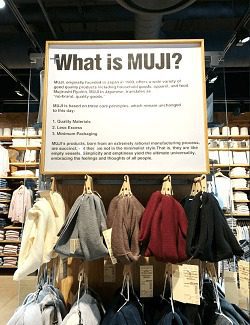 Muji has 13 stores here in the states, but we were new to it. And oh, did we love it. Upon entering, we realized that we were immersing ourselves into a store completely focused on Japanese culture and values. The store’s unique scent, music, merchandising strategy, signage, associate interactions, categories and even hyper-curated, meticulously manufactured products were all rooted in simplicity, quality, respect, positive energy and Feng Shui fabulousness.

Yet it was modern versus cliché, clean versus austere, conversational and helpful. A delightful journey inside the store, there were products to discover, each sharing the values this brand holds dear to its heart — even down to the surprising snack items set out at the cash wrap.

Muji doesn’t want to just sell stuff; it wants to bring customers into a culture that will delight their senses, open their minds and improve their lives. And, so it does.

‘The Exclusives’: The General by Vans

There are only two of these special stores, the first created by a pro skateboarder in the Village. It was so successful, Vans bought the concept and placed another one in Williamsburg. Think about that for a minute: A skateboarder created a store concept so cool that the brand bought it! And there will not be others — which is why it works. 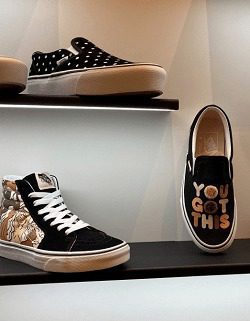 The General is about exclusives. Many of their items are only available in these two locations, and you have to come into the retail location to get them — meaning no e-Commerce. As in, you have to work to get them. The staff is top-notch and quick to tell you the stories behind the many coveted SKUs, which range from hard-to-shred skate shoes — to Vivienne Westwood’s fashion capsule — to cancer-cause sneaks.

I made mere mention of this place to my 12-year old and within two seconds was Facetiming with her and her posse to pick out a pair. Now wearing them, she gets stopped at least once a day to ask where she found them, which she informs them with a “sorry, you can’t get them” smugness…a common narrative that creates more and more pilgrimages to this place. Do you sense the cycle and scarcity-based appeal? Brilliant.

The owner of this store joined us for a panel, and we found his approach to retail delightful. He and his wife had dreamed about opening a store for many years, and they did so in Williamsburg before it became mainstream. The concrete represents the city and its aesthetic, and the water symbolizes their other love — which is the natural elements of the earth and all the beauty connected to it. 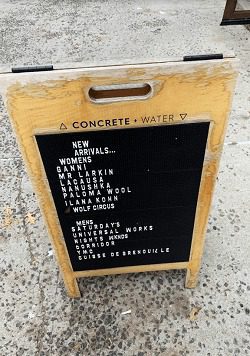 The purpose of the store is to be a destination for small-batch designers (along with their cult fashion followers), but keep quantities coveted and limited. Their online reviews glowed with an emotional fervor we’ve rarely seen, and when we got there, we were surprised how small the store was — likely less than 1,000 square feet. A sandwich board outside noted which designers had new items in the store, and the truly luminous young woman behind the counter was quick to host us through the space and point out who was who and what was what. The service she provided was sublime, and she knew every single thing about every garment, accessory and home good on the floor. Her storytelling acumen was spot on. It was clear that every item was ‘special’ and that this was a store the local influencers followed to snag fierce finds.

The event space in the back caught our interest, which we learned was for concerts, trunk shows, local events and lazy moments — and they were quick to show us how the entire back wall opened up to allow it to morph with the store. Trees, chairs, breezes and billowing materials made you want to sit down and just soak in the place — which was exactly what they were striving for.

This store is from a very mainstream brand, but the concept is not. Space Ninety 8 is the experimental format for Urban Outfitters, and while we recognized the brand’s aesthetic and overarching feel of the merchandise, it was undoubtedly edgier.

Like any good loft, there were lots of cool spaces and places to discover. Unusual for the brand, it held a pop-up space that thematically rotates and hosts not only live experiences (currently an astrology-themed immersion, with live Tarot readings and incredibly cool featured merchandise), but also records, a photo booth, exclusives, a literal bargain basement and a soon-to-open café.

Open ceilings, rough concrete, exposed brick and warehouse-inspired windows made it seem like the real deal, and it was impossible to not scoop up a basket of quirky, delightful finds. The curation was spot-on, and we hope to see more of what’s found in this store in their mainstream footprints. For us, it was a great example of the big boys learning from the locals — and keeping the retailer’s brand police at bay.

The key takeaway from these Williamsburg wonders was that they were all unique in ways that make transaction secondary. People come to these stores to immerse themselves in an experience that is unified by a higher purpose. They are radically original, and cater specifically to the locals and their lifestyles. Few (if any) repeatable, franchise-able concepts have survived here, likely because the community simply won’t support anything fake or contrived. And, in case you were wondering, not one of them was worried about Amazon.

Laura Davis-Taylor and Ed King are Co-Founders of HighStreet Collective, a store innovation consultancy focusing on expanding the boundaries of brick and mortar. They are proving it out on the retail stage with their newest initiative, the Living Retail Lab.