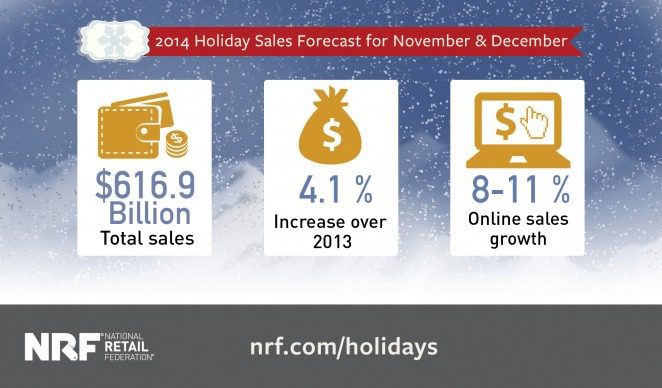 The National Retail Federation (NRF) expects sales in November and December to increase 4.1% to $616.9 billion. The forecast is a full percentage point higher than the 3.1% increase experienced in 2013 and the first time it has topped 4% since 2011. The NRF attributes this potential growth to a number of factors that include a longer holiday shopping season than 2013 and issues that will not impact shoppers this year, such as the government shutdown. Lower utility costs due to a mild summer and falling gas prices also contributed to the higher forecast.

The NRF holiday sales forecast is based on an economic model that uses indicators that include consumer credit, disposable personal income and previous monthly retail sales releases. This year’s forecast also included non-store categories, such as direct-to-consumer, kiosks and online sales.

“Retailers could see a welcome boost in holiday shopping, giving some companies the shot in the arm they need after a volatile first half of the year and an uneventful summer,” said Matthew Shay, President and CEO of NRF. “While expectations for sales growth are upbeat, it goes without saying there still remains some uneasiness and anxiety among consumers when it comes to their purchase decisions. The lagging economic recovery, though improving, is still top of mind for many Americans”

Although positive economic indicators, such as jobs and housing data, contributed to the higher forecasts, NRF Chief Economist Jack Kleinhenz also pointed to economic recovery and reminded retailers that shoppers will still be looking for bargains.

“Though we have only seen consumer income and spending moderately — and erratically — accelerate this year, we believe there is still room for optimism this holiday season,” said Kleinhenz. “In the grand scheme of things, consumers are in a much better place than they were this time last year, and the extra spending power could very well translate into solid holiday sales growth for retailers; however, shoppers will still be deliberate with their purchases, while hunting for hard-to-pass-up bargains.

In a related announcement, Shop.org forecasted online sales to grow between 8% and 11% this holiday season, increasing to as much as $105 billion.