Exclusive Q&A: How Long Will The ‘Amazon Effect’ Continue To Rock Retail? 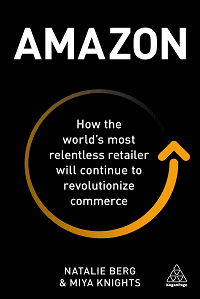 Despite the millions of words that have been written about Amazon, its actions often remain mysterious — so much so that the question of “What will Amazon do next?” can spark an animated guessing game at almost any gathering of retail executives. But according to consultants Natalie Berg and Miya Knights, one key to understanding the e-Commerce giant is that it’s not really a retailer; it’s a technology company that happens to be in the retail business.

However it’s defined, Amazon has clearly changed consumer expectations about ease of shopping, convenience and delivery, but it also has forced other retailers to up their game in order to compete. In this exclusive interview, Berg and Knights, authors of the new book Amazon: How The World’s Most Relentless Retailer Will Continue to Revolutionize Commerce, reveal many of the secrets of Amazon’s success — as well as the vulnerabilities that could eventually turn the disruptor into the disrupted. Berg, former Global Research Director at Planet Retail, now runs her own consultancy, NBK Retail; Knights is Head of Industry Insight for Eagle Eye Solutions.

Retail TouchPoints (RTP): What are some of the reasons that Amazon is such a dominant force in retail? What do they do right?

Natalie Berg: The first thing to remember is that Amazon isn’t really a retailer; it’s a technology company. They love constantly innovating, have a relentless dissatisfaction with the status quo, and are always looking to improve the customer experience. Also, it’s not just about what Amazon sells, but how they sell it. Early on, Amazon recognized the importance of having a frictionless experience, and that has shown itself in their navigation, user-generated reviews and delivery/fulfillment. Shoppers became addicted to the convenience of finding millions of products at their fingertips that show up on their doorstep in one or two days. Essentially they created this ecosystem, and focused on embedding themselves into the consumer’s life and their home.

Miya Knights: Amazon has disrupted how things are sold and also challenged other retailers to keep pace with them. While a traditional retailer would see itself as being relevant to a consumer at certain times in their life, or for certain purposes, Amazon doesn’t distinguish. They want to be integrated into every part of your life, and to be the first ‘port of call’ for anything that a person buys, including movies, music, consumer electronics — not just traditional consumer products. In the UK we saw this start to happen in the 1990s with the exponential expansion of Tesco, which moved into things like credit cards and mobile phones. That brand diversification is somewhat like what Amazon does now, but Amazon is doing it on steroids. As long as it’s relevant to the Amazon ecosystem, and if it’s convenient to the customer, the customer will embrace it.

RTP: Does Amazon have what it takes to succeed in brick-and-mortar retailing? And was moving into grocery (via the Whole Foods acquisition) a good first step for the company?

Berg: I think Amazon has recognized that pure-play e-Commerce is dead. The structural economic advantages of being an online-only retailer have disappeared due to rising shipping and customer acquisition costs. Additionally, grocery was a priority for Amazon, and they would never be able to crack it without physical stores. The reason they have been so attracted to grocery is that it gives Amazon [shopping trip] frequency, which is something they hadn’t had until now. If you’re a Prime member and you shop with Amazon on a weekly basis, you have your ‘Prime blinders’ on, so you are much more likely to make Amazon your first port of call. Essentially, it becomes the default option.

Knights: If Amazon wants total domination, they have to crack food. I agree that frequency is absolutely key. Also, for the sake of Amazon’s business, they have to see what customers are doing offline as well as online; they need a more rounded view of the customer to tailor their offers. Amazon has focused all of their innovation into the grocery and convenience sectors, and by doing so they have kicked other grocers up the bar. For example, they forced Walmart and Kroger to ramp up their click-and-collect functionality in the last mile, as well as technology like the Walmart ‘collection towers’ for BOPIS. And with Amazon Go, they essentially created a new store format in convenience by focusing on a key point of friction in the process — waiting in line at the checkout.

Berg: In the UK, the ‘Amazon Effect’ has created a huge focus on same-day delivery; retailers here have replaced the price wars with the time wars. Tesco has been offering same-day delivery nationwide, even though Amazon is still less than 1% of the grocery market here. Because of Amazon Go, Marks & Spencer introduced a scan-and-go option; Waitrose is delivering groceries directly into shoppers’ refrigerators; Morrisons and Ocado are looking into the use of voice technology for shopping.

RTP: What are Amazon’s biggest vulnerabilities?

Berg: Amazon is great for purchasing, but not for shopping. They’ve taken the touch and soul out of shopping and made it simply transactional and functional. That’s a weakness that brick-and-mortar retailers are eager to exploit. Also, the jury is still out as to whether the world’s most disruptive retailer can do the most basic thing — run stores. Curation has never been Amazon’s strong suit, so for example while they can certainly sell clothes, the question remains as to whether they can sell fashion. Additionally, shipping costs are going through the roof, and returns are a ticking time bomb.

Knights: Even when Amazon doesn’t do something right, though, they learn from their mistakes. Take the Amazon Fire Phone, which led to a $170 million write-off. The phone wasn’t a good piece of hardware, in part because at the time Amazon didn’t know enough about how to create a really portable communications device. But they learned a huge lesson — and then fast forward to Alexa and Echo. These are more functionally simple pieces of hardware, and they don’t have to be integrated with phone carriers. They stay within the Amazon ecosystem. In general, Amazon is not taking on projects that require it to forge strategic alliances with other companies.

Berg: Another big area of vulnerability is the prospect of government scrutiny. It’s already happening outside the U.S.; France just introduced a digital tax, Germany is considering one and a lot of UK retailers are calling for an overhaul of business rates, because the playing field is currently very un-level.

Also, as Amazon continues to become more powerful and influential, there could be a consumer backlash. What’s happened in the past with big global retailers is that they’ve expanded geographically as well as into new product categories and services, and at some point the brand becomes diluted. The company loses its focus on what it stands for. I would say Amazon is still a long way from reaching that point, because they’re not really a retailer — they’re a technology company obsessed with improving the customer experience, and they have established this level of trust with consumers. But the backlash is coming, because at some point consumers will say ‘It’s too much.’

Other threats are likely to come from competitors, who have really raised their game. Brick-and-mortar retailers have realized that their stores are their best assets, and they are working on leveraging their physical infrastructure. Very few people want to shop exclusively online or exclusively in-store; they want to marry the best of both worlds.

Amazon is very conscious that they could go from being the disruptor to being the disrupted. Sears was the Amazon of its day, after all. And while Amazon gets all the publicity, Alibaba and JD.com are streets ahead of them in some areas. These Chinese retailers are building a supermarket from scratch [Hema, now known as Freshippo] designed to cater to the needs of the 21st-century shopper, including stripping out checkout and delivering to customers within 30 minutes if they live within three kilometers of the store.

RTP: What are some things competing retailers can do in an environment dominated by Amazon?

Berg: Amazon has raised the bar and completely reset customer expectations about having a frictionless, personalized online experience. Additionally, delivery expectations have gone through the roof — consumers expect deliveries to be fast, reliable and free, including returns. So there’s basic ‘hygiene’ that retailers need to take care of in order to be relevant to today’s supercharged customer expectations. Beyond that, they should focus on WACD, which stands for What Amazon Can’t Do. There’s an opportunity for brick-and-mortar retailers to put more personality into their stores. Stores are transitioning from the transactional to the experiential, so the store of the future will be a place that consumers can eat, play, work, learn, discover and borrow things.

Knights: Retailers also are recognizing that they can’t go it alone. Walmart is busy finding the right partners to ensure that it’s offering an experience that’s on par with what Amazon delivers. Kroger has made a big deal of its relationship with Microsoft, and Carrefour has played up its relationships with Google. Tesco and Carrefour have entered into purchasing alliances. These retailers are realizing that they can’t compete with Amazon on a technology innovation standpoint, so they need strategic levels of cooperation.

RTP: What are some common misconceptions about Amazon?

Berg: One of the most common is that Amazon is killing retail. That’s not true. Amazon is killing mediocre retail, by exposing weaker players that have fundamental issues and have failed to be relevant to shoppers. Amazon has stamped out complacency, and forced everyone else to up their game.