Retail Crime on the Rise: Expert Advice on How Retailers Can Protect Stores and Associates

Retail crime is on the rise, and it’s affecting companies of all sizes. The National Retail Federation (NRF) estimates that organized retail crime cost stores an average of $1 billion in sales in 2020, up more than 50% over the last five years. Additionally, a Business.org survey of small business owners found that 89% of small business owners experienced shoplifting in 2021.

“There’s no two ways about it,” said Gautham Vadakkepatt, Director of the Center for Retail Transformation at the George Mason University School of Business in an interview with Retail TouchPoints. “I’ve talked to several retailers and it’s a major issue that all the big retailers are dealing with.”

It’s impossible to pinpoint exactly why retail crime is on the rise, but a number of factors are at play. Contributing causes include supply chain challenges, which have made certain items more lucrative due to low availability; rising inflation, which may have driven more people to theft; and the COVID-19 pandemic, which reduced foot traffic and made masks more common.

While there are multiple loss prevention technologies available to retailers, from surveillance cameras to RFID and EAS tagging of items, retailers can (and should) supplement these investments with organizational actions including:

Retail Crime is a National Issue

One fact that remains certain is that retail theft is happening across the country. Both Vadakkepatt and Christian Beckner, Senior Director of Retail Technology and Cybersecurity at NRF, noted that this issue is affecting retailers of all sizes, everywhere. And while retailers already have some tools in place to deal with the damage being caused, there is always more that can be done.

“This is national,” said Beckner in an interview with Retail TouchPoints. “A lot of the media attention goes to a few particular areas in the country — California and elsewhere — but what we see is that this is a nationwide problem: big cities, small towns, mid-size cities, urban, rural. There are differences to some extent, state by state, but it certainly is something that we look at as a national issue. Part of the issue is even if the theft is taking place in one state or one city, a lot of the time the goods that are being stolen are moved to another state to be resold, or groups are going from state to state, or region to region, and carrying out the same types of the same modus operandi in different stores.”

No Individual Precaution is as Strong as a Community’s Precautions

No retailer can fight retail crime alone. While larger retailers have access to technology and other resources that can help minimize theft, collaboration is the key to making the most of any crime prevention program. Even the largest companies can expand their options if they reach out to partners both within and outside the retail community.

Being part of the community isn’t just about joining these organizations — it’s also about overall communication. Beckner noted that retailers can learn a lot about crime prevention by reading what loss prevention experts have to say about store layouts, de-escalation tactics, investigative techniques and other key developments. Other retailers are also important allies, and teamwork can help different retailers protect each other when they are targeted by the same organizations.

“Part of the issue here is you’ll see criminal groups go out and hit Store A one day and the next day they’re using the same types of tactics at Store B,” said Beckner. “If both companies are sharing their information on these groups and working together, they’re both stronger and better able to prevent these types of retail crime.”

Protect Your Frontline Associates — They Have Enough on Their Plates

Associates wear many hats, but loss prevention absolutely should not be one of them, according to Vadakkepatt. Associates are already busy with everything from picking for online orders to acting as frontline representatives, so relying on them to confront thieves both puts them at unnecessary risk and adds additional stress to their jobs. However, retailers should still instruct them on what to do in the case of an emergency.

“When it comes to actual frontline employees, you’ve got to train them,” said Vadakkepatt. “You obviously have to protect them. Make sure that they’re not ever put at risk. Give them tools and the skills to potentially mitigate some of the lower-level crimes that happen in the stores. How do you defuse a situation? What are the different approaches that can be taken? But it stops there. Otherwise it makes life harder for people who are already under a lot of duress and are already doing a lot more things.”

Vadakkepatt stressed that safety, rather than crime prevention, should be the top priority when it comes to this kind of training. Learning to de-escalate a situation won’t prevent goods from being stolen, but it can keep both associates and customers safe, which can pay off economically as well as in human terms. If associates feel unsafe,  it can negatively affect employee hiring and retention.

One easy and inexpensive way to reduce theft is through the use of visual deterrents, according to Vadakkepatt. While this won’t prevent organized criminals from targeting stores, signage that points out the presence of surveillance cameras — or simply placing cameras in very obvious places — can be enough to stop less determined (or less organized) shoplifters.

Dedicated security personnel also can play a role here. A guard with a prominent post will make would-be thieves think twice about targeting a store. Even if they aren’t actively stopping thefts, visible security personnel act as a deterrent. Unlike other associates, these workers come with the proper training and knowledge required to handle actual theft when it does occur.

Retailers with larger budgets can look into technological loss prevention and theft deterrence solutions. Combining multiple approaches can help reduce the shortcomings of the individual parts to create a more comprehensive whole. 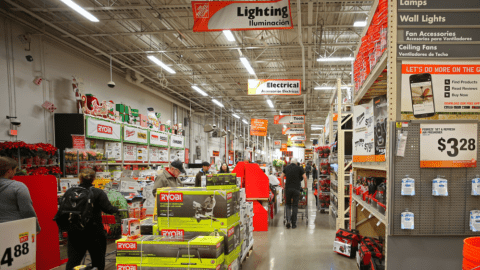