Retailers today are operating in the “NOW economy” — a time when mobile-first customers can summon almost anything they want on-demand. Buy online, pick up in-store (BOPIS) programs are key to serving these shoppers, but speed is of the essence: customers who wait less than two minutes to get their order are more than 4X as likely to return to the store than customers kept waiting for 10 minutes or more, according to a study by Rakuten Ready.

“In a sense, it’s not all that surprising: the reason they’re using a mobile order program is because they’re busy and they want to save time,” said Jaron Waldman, CEO of Rakuten Ready in an interview with Retail TouchPoints. “So if they get to your location and they feel like they are saving time, they’re going to be really grateful and invest in your brand. But if they’re kept waiting when they get there, unsurprisingly, they’re less than 20% likely to come back after an experience where they’re waiting 10 minutes or more. That underscores the importance of wait time as a whole.”

Retailers are performing fairly well when it comes to hitting this mark: the average wait time in the study was three minutes and 34 seconds, with 38% of pickups ready in less than two minutes and 73% ready in less than four minutes. However, retailers are lagging behind the standard being set by quick-service restaurants: 58% of this industry’s orders are ready in under two minutes, with 78% in under four minutes.

Best Buy earned top marks for average in-store wait time, at just one minute and 52 seconds (with 64% of orders ready in less than two minutes and 92% in less than four minutes), followed closely by Nordstrom at one minute and 56 seconds. However, other retailers failed to hit the two-minute mark, some by significant margins:

Best Buy’s success can be attributed to its well-staffed operation and vast experience with in-store pickup, according to Waldman. Retailers traditionally handled pickup orders at the same counter as customer service, potentially trapping shoppers there for pickups in line behind those with complicated returns or complaints. Best Buy first created a dedicated pickup line, then found a level of staffing that made the experience as painless as possible.

“Best Buy has been at this longer than anybody on the in-store pickup side, and they have evolved,” said Waldman. “When I first tried their program, they made it hard: there was a line, but it wasn’t well-staffed, and it basically made you feel like you were applying for a passport. Now they’ve really invested in pickup and I think the experience has really gotten great.”

By comparison, only 16% of Lowe’s BOPIS orders were ready in less than two minutes, and just 52% were ready in less than four minutes. These slow times may be due to staffing or training challenges; Lowe’s employees came across as less prepared and knowledgeable than Best Buy associates, according to Waldman, who recalled one interaction when an order was picked up during lunch hour. The usual associate behind the counter was on break, and the worker covering for them wasn’t properly trained in the process.

“It kind of underscores the importance of having good, clear training materials,” said Waldman. “We’ve learned these need to be short, concise and easy to pick up, because there’s so much turnover and the people in the stores are really being asked to do a lot of different things.”

Larger companies tend to have a leg up when it comes to rolling out the latest innovations, but Rakuten’s study found that this wasn’t the case with curbside pickup, a popular BOPIS option among grocery chains. No company could match Whole Foods’ average wait time of three minutes and four seconds, but in general the regional players stayed under or close to the six-minute mark:

The national grocery chains were less likely to beat that six-minute threshold despite having more resources at their disposal:

“We feel two minutes is ideal in grocery, but very few companies are hitting that mark, so six minutes is livable,” said Waldman. “We know from our sister company Rakuten Intelligence that Walmart Grocery pickup is growing and they’re rolling it out across more and more stores, but they’re only getting 56% of their orders done ahead of that six-minute deadline. We’re surprised to see regional players coming in with these curbside pickup programs that are in some ways a little more mature.”

Even though its average order time was middle-of-the-pack, Albertsons actually performed the poorest overall among grocery chains. None of its orders were ready in less than two minutes, and secret shoppers complained about a difficult-to-use app and inconvenient pickup parking spots.

“We have worked with H-E-B and we know them to be very customer-centric, so it’s in the company culture to get these things right,” said Waldman. “They’ve also been at the curbside pickup thing for quite a while and they’ve invested heavily in it, so they think about it the right way. It’s a question of getting technology right, but it’s also a question of getting operational processes right in and around the store.”

Operations And Communication Bring It All Together

As Waldman notes, the common thread connecting top-performing pickup retailers like Best Buy and H-E-B is their dedication to the overall experience. In addition to well-trained staff and clear signage, good communication is one of the key ingredients in a successful BOPIS program. Retailers need to send the right emails and push notifications at the right times, to guide new shoppers through the pickup process without overwhelming them.

Another easily overlooked aspect of communication is branding. Giving both the order page and the pickup counter signage the same graphic design provides a useful visual guidepost, bridging the gap between digital and physical for new BOPIS customers.

Finally, good communication can salvage the inevitable times when a pickup goes wrong. The best BOPIS retailers have friendly staff who are just as capable at calming frustrated customers as they are at processing orders.

“I would definitely call out Nordstrom on that front: on the very rare occasion where something didn’t go well with a pickup, they’re fantastic at salvaging the experience by having really well-trained associates who are very focused on delivering great customer experiences and making up for the fact that they had to wait a little longer,” said Waldman. “Additionally, I know H-E-B [associates] will walk out with cookies if they keep you waiting for your order. So someone will say, ‘I had to wait 10 minutes, but at least I got a warm cookie.’ That can make more difference than people realize.” 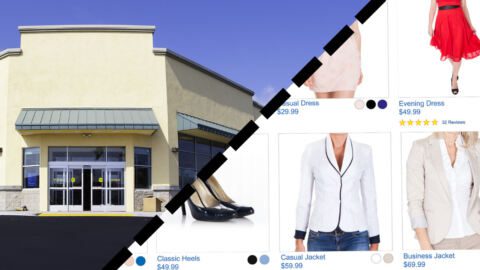