Reports: Peloton, Lululemon Duke it Out Over Exercise Apparel

Lululemon’s lawsuit, filed in a California district court Nov. 29, comes just five days after Peloton filed its own preemptive lawsuit in a Manhattan district court on Nov. 24. Peloton, which had received a cease-and-desist letter from Lululemon earlier in November, asked the Manhattan court to declare that it had not infringed on any patents.

Peloton’s decision to launch its own line of branded apparel spelled the end of a proposed co-branding arrangement with Lululemon, which Peloton said was terminated “amicably” at the time. However, Lululemon now is taking issue with the design of some of Peloton’s apparel offerings, claiming that five designs in particular infringe on its patents.

Peloton has denied any design infringement, saying in the filing, “Even a quick comparison of the Lululemon ‘patented designs’ with the allegedly infringing Peloton products reveals numerous clear and obvious differences that allow the products to be easily distinguished. What is more, Lululemon’s claimed design patents are invalid because, at a minimum, they are anticipated and/or obvious and, thus, cannot be infringed upon.”

A Lululemon spokesperson defended the company’s cease and desist efforts, telling CNBC, “We will defend our proprietary rights to protect the integrity of our brand and to safeguard our intellectual property.”

Peloton has been selling apparel since 2014 in partnership with numerous brands, including a collaboration with Adidas earlier this year, but this is the company’s first foray into designing its own private label clothing.

Peloton’s expansion into apparel comes at a critical moment for the exercise brand, with the stay-at-home boom that had propelled its recent growth beginning to wane. In the company’s Q1 results, which were released in early November 2021, Peloton reported weakening sales growth and wider-than-expected losses, leading to a 25% dip in its share price. While the Omicron variant seems to be giving the brand a boost, a diversification of its product offering is widely seen as a hedge against the eventual return to gyms, whenever that might be.

Peloton’s move into apparel isn’t the first time that the once-friendly companies have found themselves on competitive turf. In July 2020, Lululemon also expanded beyond its core products with the acquisition of the MIRROR at-home fitness platform, a Peloton competitor. 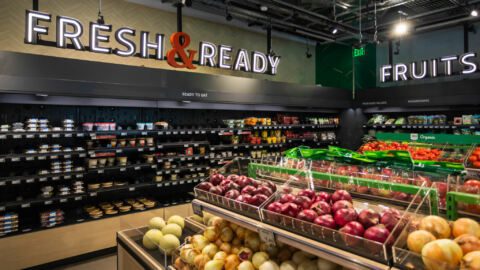 Amazon to Share Shopper Insights from its Grocery Stores with Brands