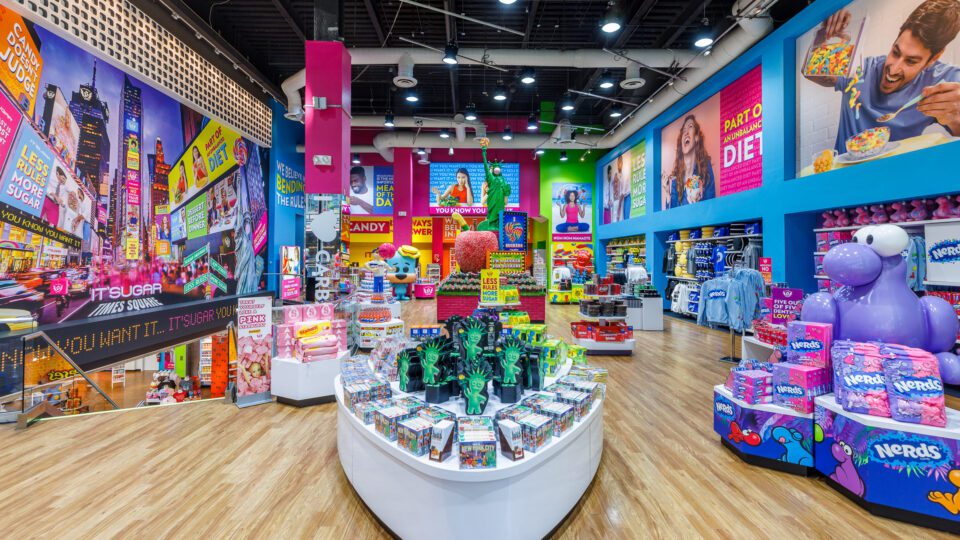 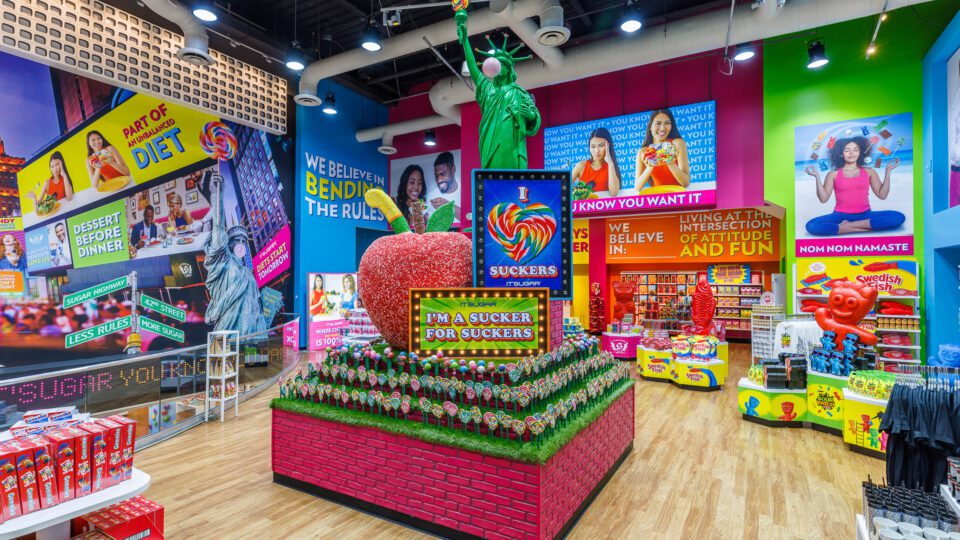 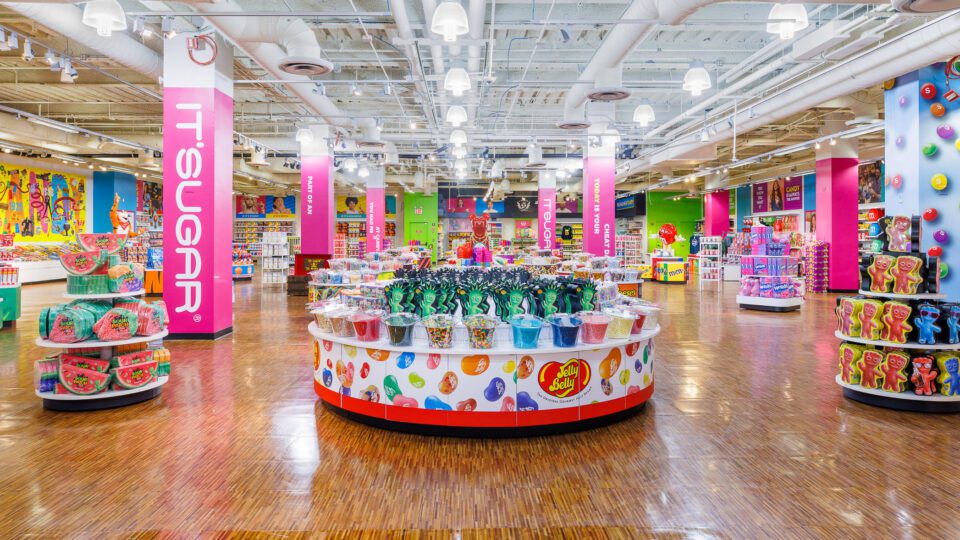 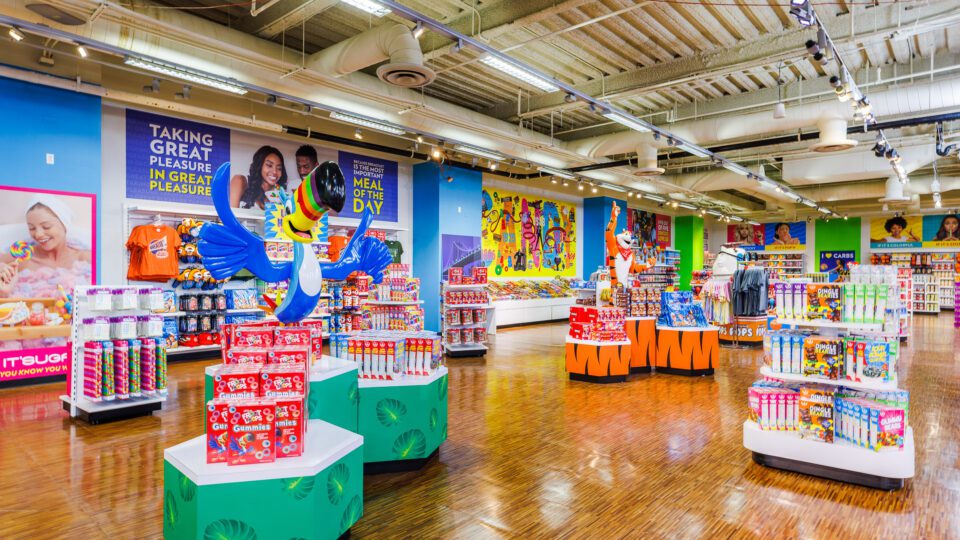 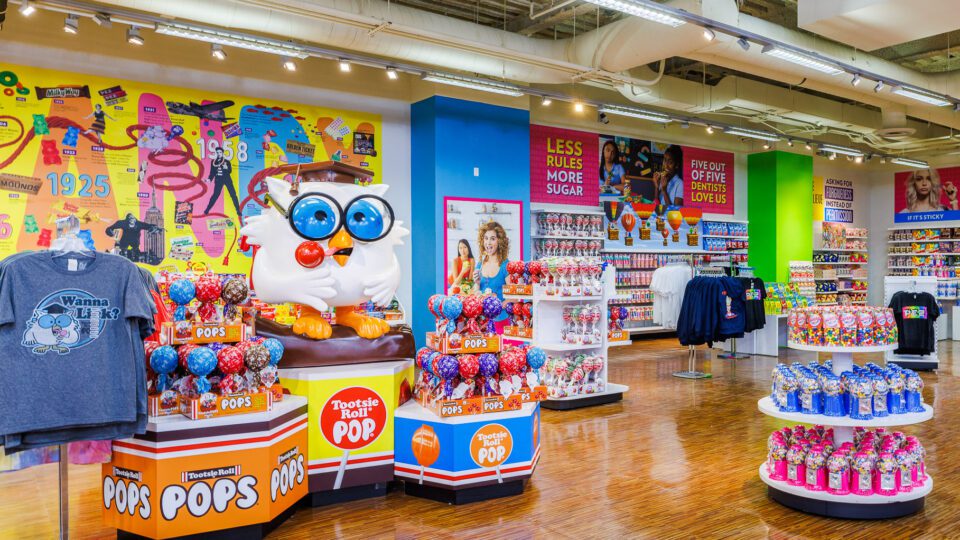 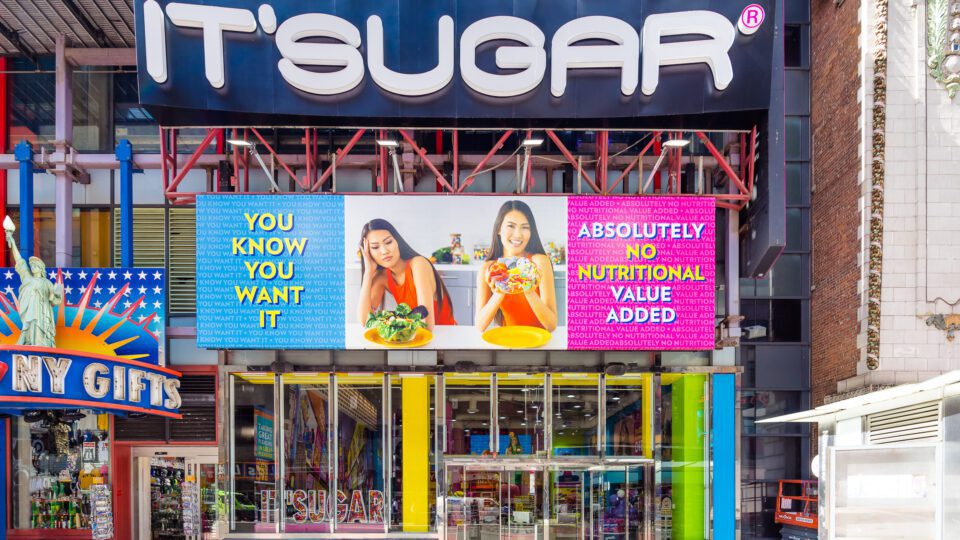 IT’SUGAR showed off the sweet side of retail when it recently opened its 20,335–square-foot, two–story candy department store in New York City’s Times Square on Aug. 11. This second-largest IT’SUGAR store, in a former Modell’s Sporting Goods location, has been transformed into a brightly lit, colorful wonderland of sweet treats, with high, open ceilings and light wood flooring to allow the confectionary rainbow décor to shine.

A focal point of the first floor is an IT’SUGAR interpretation of the Statue of Liberty, who is depicted blowing a bubble of pink gum, with her torch replaced by a jumbo yellow, blue and orange lollipop. Placed atop a display in the center of the store on a base that features a lollipop garden, Lady Liberty stands alongside a large, red “Big Apple” made of jellybeans.

A number of freestanding displays feature an assortment of goodies, including NYC-themed souvenirs, while colorful walls display bright candy-themed graphics, such as an IT’SUGAR-themed depiction of Times Square and imagery of models indulging in sweets.

After descending stairs to the basement floor, visitors encounter a Jelly Belly jellybean bar surrounded by branded displays from other candy companies. Licensing with more than 35 brands such as Sour Patch Kids, Oreo, Nerds, Starburst, Skittles, Reese’s, Toxic Waste, Pez and Tootsie gives shoppers opportunities to explore candy and merchandise from these companies within branded sections. Many of these partners also supplied statues of iconic brand mascots, and candy stations offer hundreds of different types of candy sold by the pound, with exclusive flavors from brands such as Skittles, Sour Patch Kids and Pez.

IT’SUGAR’s approach to retailtainment includes sections devoted to international and retro candy. The shop also features candy that is trending on TikTok to encourage digital engagement.

“Times Square is a major entertainment hub, and we are so excited to be a part of one of the world’s most visited tourist attractions,” said Jeff Rubin, Founder and CEO of IT’SUGAR in a statement. “IT’SUGAR is known for creating an environment like no other — one that fosters the greatest feeling of happiness; allowing you to enjoy the treats you love without judgment. At IT’SUGAR, it is not only about taste, but also about delivering a unique experience and our store in Times Square provides just that. We are having an exciting year of store openings, proving that America still loves candy!”

The opening of the Times Square location was followed by an Aug. 15 opening of the retailer’s first store in Canada, a 5,000-square-foot space at Alberta’s West Edmonton mall.