Timothy Oulton, a British luxury furniture brand, has signed a 10-year lease for a 7,170-square-foot retail space at 901 Broadway at 20th Street in New York’s popular Flatiron District. The store will serve as the retailer’s East Coast flagship, and will be the brand’s largest retail presence in the region.

The new store resides in a portion of a larger historic landmark building, designed and constructed in 1870 in the French Second Empire style by James H. Giles for the iconic department store Lord & Taylor. Timothy Oulton’s in-house design team has developed the concept for the new flagship store, which will be built by New York-based McAlpine Contracting.

Timothy Oulton has an international presence, with 45 retail galleries worldwide. In addition to the newly leased location, the brand currently operates seven stores in the U.S., including at the New York Design Center in Manhattan as well as in Connecticut, Miami, Los Angeles and San Francisco.

“We opened one of our first galleries in New York City back in 2009, because I considered New York one of the great, if not the greatest, of the world’s cities,” said Tim Oulton, Founder and Creative Director of the eponymous brand. “It’s a global epicenter of great design, so I’m excited to be reopening here. We recently opened new stores in downtown Los Angeles and Miami, but New York is extra special and complements openings in other prominent gateway cities elsewhere in the world.”

The $1 million construction project — which is expected to be complete by late-summer of 2021 — will revitalize the currently vacant ground-floor retail space, which has dramatic full-height windows on the first floor to provide clear views into the interior space. The new store will feature a 1,890-square-foot main showroom area on the first floor and a 344-square-foot mezzanine. An open stair connects to a 1,221-square-foot lower level that will provide additional showroom space as well as a café bar, reflecting Timothy Oulton’s ethos of hosting. Additional space on both floors is designated for storage and mechanical spaces.

“While the existing flooring will remain, the majority of the walls will be finished with gypsum board, and both walls and ceilings, as well as the open railing surrounding the mezzanine, will be painted in matte black,” said John Nolan, VP of McAlpine in a statement. “Ceiling-mounted Soraa spot lighting systems and custom chandeliers structurally suspended on a steel grid system will delineate individual display areas. The grid system will lend versatility to the space, allowing the store planners and merchandisers the flexibility to revise the interior layout periodically.”

The store also will include several unique features: 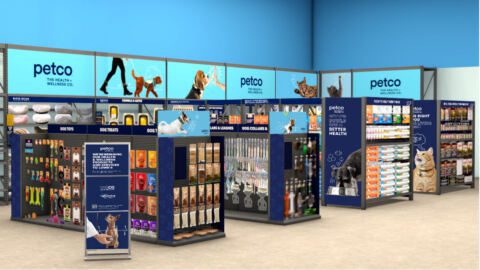 Petco to Set up Shop-in-Shops at Lowe’s 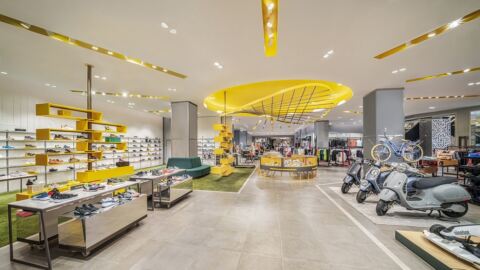