OfficeMax has proven itself to be one of the most innovative marketers in the retail space. It recently announced it will reprise its highly trafficked Elf Yourself campaign this holiday season, after driving 193 million website visitors last year to upload a photo so they could see what they looked like as an OfficeMax elf. Following up on the Elf Yourself campaign, now OfficeMax is adding a layer of cause marketing.

The “A Day Made Better” cause marketing initiative, in which OfficeMax and education advocate Adopt-a-Classroom surprised over 1,000 teachers with school supplies across the US and Mexico, is one of the activities that “gives a company a soul,” according to OfficeMax VP of Marketing Bob Thacker.  Retail TouchPoints had the opportunity to talk with Thacker and learn the fundamentals of the recent “A Day Made Better” cause marketing initiative. The former VP of marketing for Target Corp. and head of creative for Sears, Thacker is one of the more experienced and respected voices in retail marketing. In addition to detailing the Day Made Better campaign, Thacker also touched on the company’s holiday plans, and how the elves are taking over.

Retail TouchPoints: Can you speak to how and why cause marketing is becoming a more important element of a retailers’ marketing mix?
Bob Thacker:  I’ve been involved in cause marketing for over 20 years. I actually helped create cause marketing when I was at Target and I felt then, and I feel even stronger now, that it is what gives a company a soul. People today are looking for a deeper relationship with companies they do business with. Many people today feel that they don’t want to do business with what I call a “carpet bagger,” a company that just comes into the market and just takes money out and doesn’t put anything back, or make the experience richer or more rewarding. People really expect companies to have a soul, and cause marketing is one of the ways that companies can do that.

RTP: How, if at all, does the economy factor into cause marketing?
Thacker: For [OfficeMax], it really wasn’t a factor at all. Other people have asked, ‘well, gee, with what the economy’s doing your sales are probably not as great as you’d want them to be. Have you thought about canceling that?’ My response is: would I cancel Christmas? They are two different things. Cause marketing can and does lead to increased sales, but that really isn’t why it should be on your marketing initiative. It has to do with who you are as a company. Do you put your soul away because sales are down? I don’t think so.

RTP: You had mentioned how consumers are looking for a deeper relationship with the companies they shop. How does the customer psychology and perception of cause marketing factor into it, and how is “A Day Made Better” really nurturing those thoughts?
BT: The Cone Cause Evolution study 2008, released this month, revealed that education was the leading issue among Americans.  79% of consumers said if the price and quality were similar they would switch to a brand associated with a good cause.

RTP: The “A Day Made Better” initiative was launched in 2007. Was there a difference in last year’s initiative to that of 2008?
BT:  Yes.To go back and recap why we did it in the first place, the whole idea of teacher’s funding their own classrooms is a crime. And teachers spend $4 billion a year of their own money to pay their way, and on average, a teacher makes about $30,000 a year. Our whole attempt is to make this a national cause. We can’t fix it ourselves but we can certainly bring attention to it, do what we can and make the public aware of what a crime is being committed. In 2007, we did 1,000 classrooms all over the country. In 2008, we increased it by 1/3 to 1,300 classrooms and we involved Mexico. We also brought celebrity and key opinion leader attention to it. We had some very prominent people supporting this initiative, and in some cases, going out and surprising teachers. It grew in a really great way to become something bigger, more dynamic, than we had expected it to be. 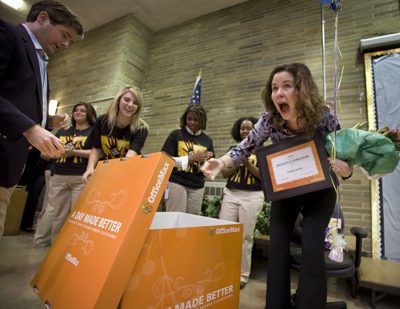 RTP: Was there a criteria for the teachers selected who received supplies on “A Day Made Better?”
BT: Yes. They were all selected by our non-profit partner, Adopt-a-Classroom. We were not involved in the individual school selection. The teachers all needed to be in school that had a high level of need. A majority of the children in the schools are on free lunch programs, come from lower income families and in schools that have generally a greater need than, say, a well-endowed private school or a school that has some legacy or a huge foundation behind it. These are poor schools, underpaid teachers with kids who need it the most.

RTP: Does OfficeMax plan to continue the “A Day Made Better” effort in the future?
BT: Oh yeah, it’s deeply engrained in our culture and it’s’ really fun to walk around and hear people talk about ‘okay, next year on a day…’ It’s come down to a day and it’s referred to like it’s our day. I’ve been involved in 50 or so events like this in my career, and this has been the most emotionally effective and has done the most to raise the whole self esteem of the company… Our primary focus is on helping teachers and schools.

RTP: Does the company plan to bring back the “Elf Yourself” promotion for the holidays?
BT: He’s back! He’s going to be bigger than ever before. We’re just getting ready to launch him after Halloween. He’s going to be available in four different varieties of music and different dances. It has taken on a life of its own. It’s set a bar that nobody I know has been able to match, including us. The thing that’s different this year is that people will actually be able to make things out of the elf. You can make Christmas cards and different novelty items ad ornaments, so the elf can be preserved permanently, whereas before he used to be limited to the viral space. He will actually be available in product form so that’s going to be fun! It has become the viral equivalent of Frosty or Rudolph, the classic icons of the past. The elf is today’s version of that. Over 30% of the people who created elves said it made them feel better about OfficeMax.