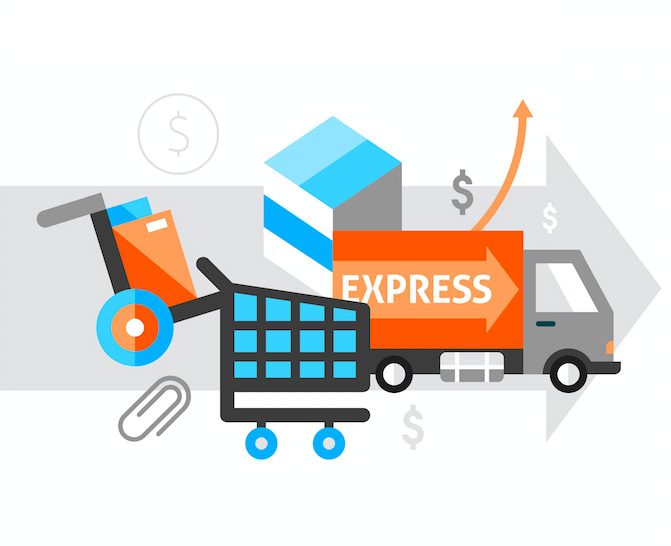 Following is Part 1 of the report, titled: How To Choose The Right Delivery Models. This feature will outline delivery and fulfillment trends from the 2014 holiday season and reveal which retailers are embracing newer tactics such as ship-from-store and in-store pickup.

A true omnichannel shopping experience is the ultimate value proposition retailers can offer their customers, and the order delivery and fulfillment experience is a vital part of this new shopping journey. To succeed, retailers must allow shoppers to receive their items at any time, and through any channel.

With Amazon offering more convenient shipping options, such as free shipping through its Prime service and one-hour shipping in New York City, customers are expecting their shopping experiences to be easier, faster and even cheaper.

“Amazon Prime let the genie out of the bottle,” said Eleanor Powers, Head of Proprietary Research and Acting CFO at L2. “Retailers are having to subsidize free shipping in order to compete. Now, speed of fulfillment is the next area of competition. As retailers have fought back against Amazon with omnichannel delivery and returns options that leverage their store locations as a competitive advantage, consumer expectations are increasing with this regard as well.Retailers are having to increase their investments in inventory visibility and fulfillment capabilities.”

Retailers such as Best Buy, Macy’s, Shoe Carnival and Target are ramping up their delivery and fulfillment strategies by offering:

During the 2014 holiday season, online sales reached an all-time high. To meet and exceed shopper expectations, many retailers made bold promises, guaranteeing on-time delivery of all gifts, even if customers ordered them at the last minute.

Apple, Dell, Nordstrom and Zappos were among the businesses that not only set the bar high for fast shipping during the holidays, but also delivered on their promises. All four brands guaranteed delivery by Christmas Day for online orders placed as late as Dec. 23, 2014. To measure the effectiveness of various holiday delivery methods, customer service performance monitor StellaService placed four orders with 40 different retailers on their respective Christmas Day cutoff dates. Upon arrival of the packages, the company discovered that the four retailers that offered the latest cutoff date all delivered their packages on time.

Retail consulting firm Kurt Salmon conducted a similar experiment in December 2014, placing two orders with 50 different retailers on their cutoff dates. Similar to the StellaService survey, Kurt Salmon found Nordstrom and Zappos, as well as Staples and REI, to be the top performers of the season. The survey found that only 13% of orders did not make it to shoppers in time for Christmas, an improvement from the 15% failure rate in 2013. Additionally, the research found that none of the late deliveries could be attributed to carriers such as FedEx and UPS, whereas 44% were attributed to them in 2013.

The holiday season also gave businesses the opportunity to be more creative with their delivery models.

In an Amazon-like maneuver, Target waived its standard shipping fee for all purchases on Target.com made from late October 2014 through Dec. 20, 2014. With this move, Target hoped to revive a consumer base that had been dormant following the retailer’s data breach that took place between November and December 2013. The introduction of free shipping, combined with the increasing popularity of the Cartwheel digital couponing app, contributed to a record holiday season that saw Thanksgiving and Cyber Monday e-Commerce sales increase 40% over 2013.

By Dec. 20, Target.com doubled its holiday sales year over year, according to a company statement.

Shoe Carnival is another retailer that revamped its fulfillment strategy just before the holiday season. The retailer partnered with eBay Enterprise in September 2014 to deploy order management and ship-from-store capabilities. As the retailer’s inventory scalability improved, it also saw an increase in conversions and customer satisfaction, and a decrease in shipping costs throughout the holiday season.

“Our holiday results were tremendous versus last year,” said Kent Zimmerman, VP of E-Commerce at Shoe Carnival. “We think that it was a matter of making some usability changes to the site, docking the right inventory. Our ability to leverage our distribution center as well as our stores put us in a place where we were able to fulfill a lot of high-volume orders over a short period of time and take that off of the store operations personnel, but at the same time, continue to do business as normal. With a higher volume, spread across multiple stores, we were able to get product to the customers quicker.”

ShoeCarnival is one of many retailers adopting “ship-from-store” as a means to extend the omnichannel delivery experience beyond the warehouse. Kurt Salmon 2014 holiday shipping data estimated that as many as 50% of major retailers would use ship-from-store technology throughout the holiday season, a substantial increase from the 15% projected in 2013.

With ship-from-store, retailers can turn their brick-and-mortar stores into fulfillment centers so consumers can receive orders from the closest location instead of a central warehouse. The benefits of the method include faster delivery and access to a larger product assortment.

Retailers can implement this method without having to disrupt the customer-facing aspects of the brand experience. No changes need to be made to the store layout, purchasing process or e-Commerce site appearance. Therefore, the consumer shopping experience is enhanced through all channels without the consumer even knowing it.

“In theory, our customers should never really see this,” Zimmerman said in an interview with Retail TouchPoints. “This is not necessarily an option that we’re giving them. If they were shopping on our site one day when we were working with our third party logistics provider, and then shopping the next day with our new system in place, they wouldn’t have noticed anything different other than the fact that there was so much more inventory available to them. We believe our customer satisfaction metrics are going up because we’re providing more product to the customer, which is what they’re looking for.”

Best Buy, Macy’s, Target and Walmart also have successfully added ship-from-store to their delivery strategies. Best Buy, in particular, has seen a massive surge in e-Commerce sales since presenting the option in January 2014, increasing year-over-year online revenue by approximately 22%. From October 2013 to April 2014, the average delivery time for Best Buy (3.3 days) was actually faster than that of Amazon (3.6 days), according to data from StellaService. The retailer is arguably the biggest ship-from-store success story thus far, with its stock expected to boost 20% in 2015 to $45 per share, according to Barrons.

Macy’s completed the rollout of its ship-from-store program in the spring of 2014 to all Macy’s and Bloomingdale’s locations, while Walmart currently ships out of 83 Supercenters. Target rolled out its ship-from-store program in 2014 as well, with 136 of its stores now equipped to fulfill online orders. As a result, Target is now equipped to reach approximately 91% of U.S. households by ground transit within one or two days, according to TheStreet.

Although it seems that many major retailers have hopped on the ship-from-store bandwagon, the majority of the industry is still lagging behind. In fact, a Shopatron e-Commerce study conducted in November 2014 revealed that 59% of retailers said they did not have plans to deploy new order fulfillment solutions such as ship-from-store or in-store pickup. The study also noted that 71% of retailers do not have a position in their company with “omnichannel” in the title, calling into question the breadth of resources many retailers actually have in planning and executing these initiatives.

“Shipping from store is obviously a big opportunity for retailers, but then you’re taking in-store associates and in-store square footage and dedicating it to logistics,” said Gregg Aamoth, Co-Founder of omnichannel commerce solutions provider POPcodes. “Those options are for companies that haven’t invested much in central distribution facilities yet, and get a chance to spread their logistics out across the geography to reduce shipping costs in time.”

While ship-from-store is gaining steam among major retailers, there are other fulfillment/delivery options that they have adopted, including in-store pickup. With in-store pickup, retailers have the ability to re-engage customers and drive further sales once they enter the store.

For customers, the value of in-store pickup is the ability for them to order an item on a desktop or mobile device and then pick it up while they are already out and about. Retailers can emphasize in-store pickup as a way to complement webrooming, which is the process of researching products online before entering the store. In a Retail TouchPoints guest blog post, Gary Edwards, Chief Customer Officer at Empathica, explained that 88% of consumers are actively webrooming.

An overwhelming 86% of consumers want more retailers to add buy online, pickup in-store to their arsenal of shipping methods, according to a WD Partners report, titled: The Next Killer App: Stores.

“A significant amount of e-Commerce sales growth consists of omnichannel or buy online, pickup in-store,” Aamoth of POPcodes said in an interview with Retail TouchPoints. “Macy’s, The Home Depot, Lowe’s, Sears — all of the big retailers that have reported ongoing significant growth in their e-Commerce channels — have simultaneously reported significant shifts of customer behavior to pickup in-store.”

A former VP of Customer Marketing Systems and Privacy at Macy’s, Aamoth noted that pickup in-store drives more than 30% of the retailer’s total e-Commerce sales. He also explained that many retailers utilizing in-store pickup would report the sales through e-Commerce, although technically, the logistics and final purchase are conducted inside the brick-and-mortar store.

“I think it’s appropriate to recognize that initial product purchase as an e-Commerce purchase, but the fulfilling goes through to the store and they get the opportunity to sell additional products to the customer, so it’s a win-win for the merchant,” Aamoth stated. “It’s a win-win for the consumer as well, because they get that immediacy of buying the product when they want to buy it and getting the product when they want to get it. As long as the in-store fulfillment process is smooth, it meets all of those needs. I don’t have to pay more, I don’t have to wait longer, and it’s a pretty easy process to understand.”

Most still credit the brick-and-mortar store for bringing in the most sales, with 79% of retailers stating it as a primary source of revenue, according the Retail TouchPoints survey, The Omnichannel Challenge: Strategies That Work. The survey noted that 71% listed e-Commerce as a primary revenue driver.

Of course, the key to success, like every delivery point, is the implementation of the model itself. A StellaService study determined that buy online, pickup in-store services at 11 big box retailers saved an average of only 96 seconds over simply buying the item in the store.

However, many retailers are still early in implementing and refining their strategies, according to Kevon Hills, VP of Research at StellaService. But “if buy online, pickup in-store proves popular with consumers, you can expect retailers to continue to invest in a more efficient process.”

Ship-from-store and buy online, pickup in-store are not the only effective models designed to create a true omnichannel shopping and delivery experience. In part 2 of this feature, industry experts will share insights regarding how retailers can optimize their supply chains to facilitate omnichannel fulfillment, outline the growth of same-day delivery, as well as the difficulties experienced before and after implementing omnichannel delivery models.

Part 2 of this feature will appear in the February 17 newsletter.